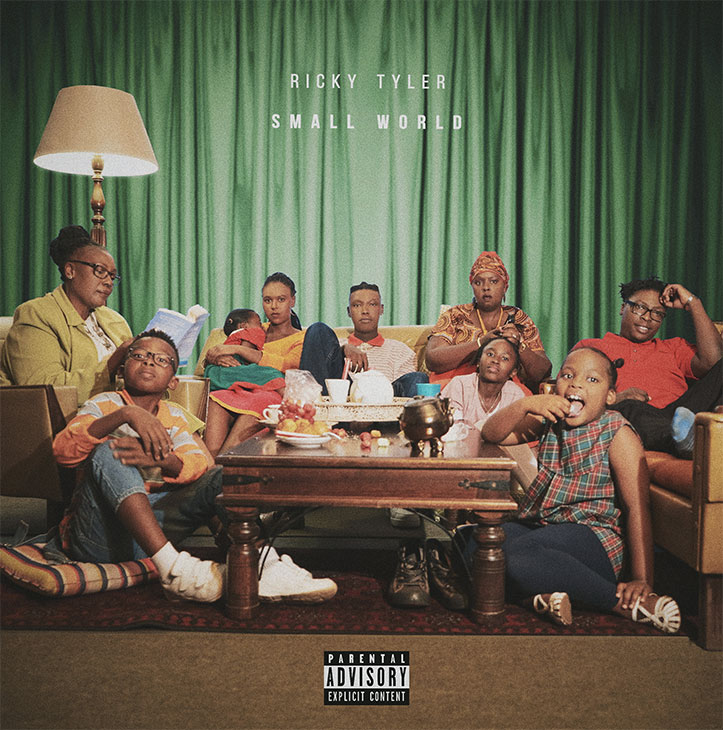 Bursting with a fresh new melodic sound, a voice that has been compared to that of Sam Smith and Ed Sheeran, new and upcoming artist Ricky Tyler is about to take the world with what he describes as an international sound with an old school flavour. He draws his inspiration from a sound that is deep, emotional, vulnerable and uplifting. His signature sound is trap soul, the sound that he finds himself gravitating towards.

Ricky Tyler has recently released 3 singles off his upcoming album, which will be his 1st album release titled Small World. The cover art of the project shows a family photograph. Instantly, you feel as if you already know him. You feel a special connection to his personality as an artist, an ordinary person like you and me, blessed with an exceptional talent.

“I just wanted to pretty much show people who I really am and just to relate as much as I can, just to show people the things I stand for. To be completely vulnerable. The most important thing to me is family,” he said when asked about his latest project.

He released “Thirty K”, a song about a girl that drove “Thirty K” to be there for him when he needed someone. This was followed by a song that we can all relate to – a song about loss. Tyler used his gift to pen down a tribute to friends that he has previously lost. When asked about it he commented, “Deja vu is dedicated to 3 of my friends who passed away in a car accident. It was a special tribute to them.”

“Everything is me trying to flip the narrative of the preconceived notions of our men. Me trying to convince a girl to give me a chance to maybe change her perspective on how she really feels; what she has gone through in the past. Let me give you everything, let me prove that I can do a lot for you,” he said on his most recent release.

Things weren’t always rosy for Tyler. He has had to endure a lot of stress to bring his very first album to a reality.

“The overall journey to making the album a reality has been stressful because I think we are trying to achieve perfection but that’s not a realistic thing. In some way, therapeutic, tapping into a spiritual place, your thoughts, emotions, memories I wasn’t in touch with at the time. It was some introspection as well, getting to know myself a little bit better,” Tyler said.

The words “new” and “upcoming” have no weight on young Tyler. He is one of the top artists from South Africa to be signed to Def Jam Africa. He is already taking up space. He highlights this opportunity as his magnum opus since the start of his music career.

“I was signed to Universal Music initially and when the partnership happened with Def Jam,” Tyler explained, “They sent my music through as one of their artists from Universal and they loved my music and they decided to put me on board.”

“Def Jam is one of my favourite labels. It’s ultimately a goal that I didn’t foresee coming and now we are here,” he expressed with glee.

When asked who he would like to make music with, he said “Someone I would really like to collaborate with in future is Frank Ocean and Drake. I love their music and versatility and the vulnerability in their music”.

Since the announcement of the lockdown a lot of people, especially artists, have had to find ways of continuing with work under strict rules and limited resources and this has put a pause on a lot of operations. “The only thing that there is a dilemma on is shooting the visuals for the singles that are out. We have to figure out a way to shoot without putting anyone in danger,” he said.

To keep up with work during these hard times, Tyler says he has a home studio so he is always working on music. A camera for his own photography and he has been mostly doing telephonic interviews. He also mentioned that he can’t do a tour at the moment but he is creating more content and figuring out ways that are safe enough to go on about shooting what he needs to, in order to put it out there for fans. However, he is currently focusing on the upcoming project.

“Right now all my attention is focused on my album. It’s my first album so I really want it to be great. You can look forward to future collaborations with other artists, but right now the album is my main focus”.

Small World will be available on various digital platforms in July.

UNITED WE STAND - From Minneapolis to Johannesburg: Our Shared Fight To End Police Violence Panel Discussion