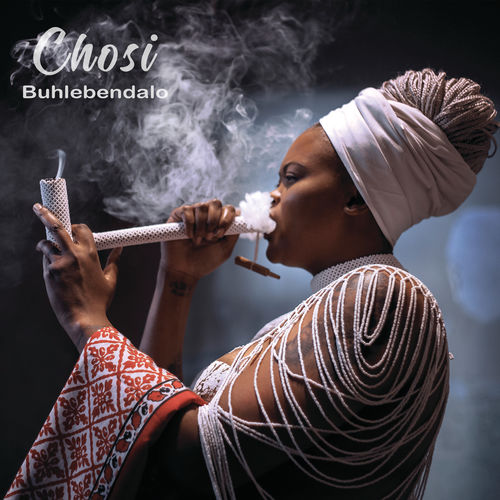 We knew that it was story time when we heard the magic words chosi chosi ngantsomi – the Xhosa version of once upon a time. It would be the beginning of unfolding tales with events that happened long before we were born.

In her pursuit of a solo career, Buhlebendalo Mda captures our attention to tell us stories from her first album titled Chosi.

“Whenever one is about to tell a story in Zulu, they say kwasuka sukela, Chosi! And in Xhosa, we say chosi chosi ngantsomi. So it’s a space where I am trying to gather people to come and listen to stories that I have been given by my elders and the prayers that I have been conceptualising. The prayers that will hopefully manifest because chosi is also a manifestation word that we use when we call upon our ancestors.

“There is a saying in Xhosa that says ‘Makube chosi kube hele’, which means everything that has been said upon the shrine, let it manifest in everything we say and ask for. Chosi is a word that resonates a lot with me because I believe that I am a storyteller and I feel like the music that I’ve done, commands silence and space of solitude and acceptance and receiving an open space where people will be able to direct their prayers to the universe,” says Mda.

In the 13-track album, she features multiple artists including:

The album couldn’t have come at a better time. People are away from the usual hustle and bustle of the cities and can get to know and connect with her music.

Mda explained, “The album came out at the perfect time. I finished recording around November and since then I was yearning to release my music. But the universe somehow delayed everything. And everything has just started coming together now during the lockdown. And it hit me that the universe was just creating a space where people were with themselves. On a journey of self–realisation and this album could be a nice accompaniment to that. I have realised that my album came at the right time where people are in a space of reflection because it’s a very reflective album. A mantra kind of album.”

Mda would not have seen her album come to life if she had not accepted her spiritual calling and went for initiation. Her initiation has inspired the songs we now enjoy on Chosi and has helped groom Mda to become the woman that she is today.

“I don’t think Chosi would have been born without my initiation. Chosi was birthed by my spiritual enlightenment and my spiritual journey because I started realising things that I didn’t think I had. I started realising my greatness, my worth and my purpose in society as a spiritual person. As a healer and as a mother. It’s this one journey that’s just written for me and I have to fulfil it. If it weren’t for that time and space in my life, I would have had an album of my own,” Mda says.

In her album, Mda addresses gender-based violence on the track called Ntabezimnyama – a song that talks about the fear we have as women. The fear of fulfilling the smallest tasks such as going to the shop because of the abuse we are subjected to. She also puts the spotlight on gender-based violence in a track titled Umenzani – a heart-rending song that questions the maltreatment of women at the hands of men to no justice. It calls on the government to protect its nation and communities to work together as one in the matter.

“Music has been one of the main things that address social issues. Taking it back to Miriam Makeba, where they were telling South African stories abroad, that this is what we are going through as a nation. Like Brenda Fassie, who was expressive, music has been such a voice to the voiceless and I think the message spreads more because there is a rhythm and a beat and people can dance to it. It’s even better if people can relate to the story behind that rhythm and the beat,” says Mda.

In her journey of self-discovery Buhle found her alter-ego – Sis Getty.

“Sis Getty is that aunty who doesn’t hold back – who always tries to put her point across. Always for children; for the community; keeps it real; addresses social issues – but in a satire manner. But at the end of the day, the point was set across,” Mda expresses, “Sis Getty has helped Buhle to be herself unapologetically and not fall into the expectations of what a celebrity should look like.”

“I think I am just using my activism with satire, where I also use my healing because laughter is the best medicine. I also heal through my stories that I go through every day.

The lockdown has definitely had its positive effects. It taught a lot of artists to explore their creativity and to find innovative ways of working while still giving their best.

“Lockdown has taught me to create content for myself. I have a beautiful team that I work with. We are trying to create some nice visuals that match the music, so people must be on the lookout for that. Follow me – I have a YouTube channel to keep myself sane and to keep the music alive,” says Mda on what she has taken away from this lockdown.

Buhle has expressed that she would love to work with younger artists who want to venture into the kind of music she does. She is now available on Instagram @sis_getty and has a YouTube channel called Triplethread Mda.

Chosi  is available on all digital platforms.