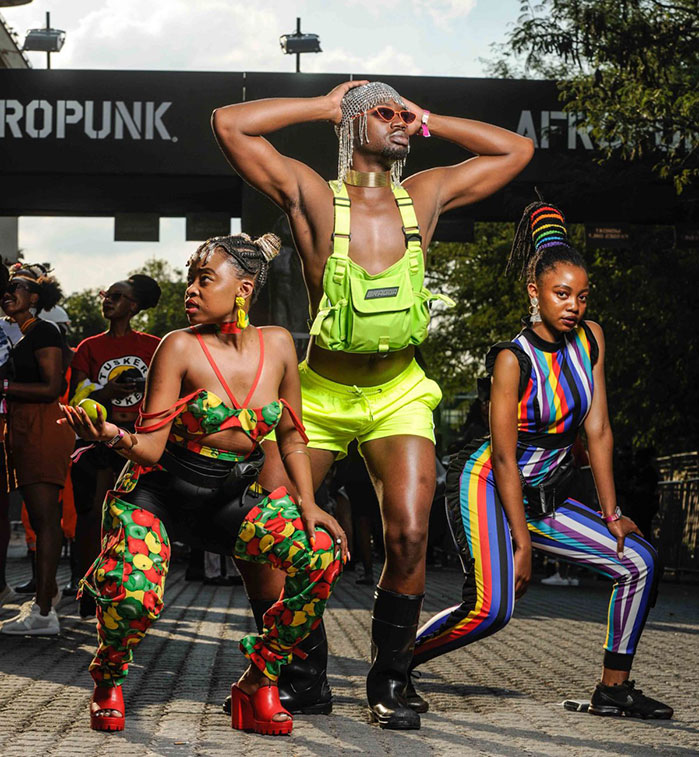 This is what sleeping and waking up in Wakanda, a fictional country located in Sub-Saharan Africa, created by Marvel Comics, must be like. Wakanda provided black readers and viewers with a cultural oasis that feels like nothing we have seen before.

Black Panther’s vision of Wakanda was a bustling metropolis of futuristic skyscrapers, racing trains and soaring spaceships. The fashion gave black people all across the globe, a great sense of pride. As a country that had never been ‘colonised,’ Wakandan fashion and style was portrayed to look like how Africans would’ve went on about their style had colonisation and the imposition of the western wardrobe not taken place.

I thought to myself as we made our way deeper into the Constitutional Hill precinct that this definitely felt like Wakanda, home to an African. The walkways were lined with African beauty, complemented by the very noticeable Joburg skyline and warm Sunny weather.

As an Afropunk virgin, I’d arrived with the misconception that the festival was mainly about live music and could not wait to see some of my faves on stage. However, upon my arrival, there was certainly a discerning focus not only on live music, but on film, art, and of course, fashion! All in abundance! All produced by black designers and artists.

Fresh out of the last and well-attended Afropunk Joburg Solution Session with professor Angela Davis, the first artist I saw on the first day of the festival was Umlilo – a genre and gender-bending multidisciplinary artist, whose name literally translates to fire.

Apart from the magnetic elements of his sound that rope one in instantly, the words from the first song performed Living Dangerously sealed the deal on being at Afropunk just before the dawn of a new decade. This was not another Joburg New Year’s Eve outing but, like Wakanda, was now an out-of-world experience I wish most, if not all, black youth in present-day society could experience.

The first words that came out of the artist’s mouth were, “I know the way we live is not the way to live. We are living dangerously.” Immediately making me take stock of how much I am doing to become a revolutionary in light of the many black struggles, and in a globalising world (as put my prof. A. Davis earlier).

In the following song, Umzabalazo, Umlilo repeats the words “start a revolution” in the chorus. The location could not be any perfect. The Constitution Hill precinct carries a dark history of the black struggle in South Africa. It was a former prison complex that bore testament to South Africa’s turbulent past and is today a museum and home to the country’s highest court on the land.

Placing the court at this very location was in itself revolutionary. An act of reclaiming a place previously affiliated with gross violations of black people’s human rights.

A theme of consciousness soon revealed itself in all the artists’ terrific performances that they were revolutionaries in their own right. Most of the setlists were marred with affirming songs of struggle, perseverance, identity and being.

“I am just a little girl from a village in Limpopo, taking on the world,” said South African rapper, singer, songwriter, actress and poet Sho Madjozi, whose performance at the festival was her first in weeks, after taking some time off to mourn the death of her sister.

Sho Madjozi was living her truth on stage. Proudly belting out Xitsonga verses in her mother tongue, and complementing it with the incredibly difficult xibelane dance. Her entire performance was an ode to coming from the smallest and unknown of places, to taking on the world — with your identity, culture and language in tow and never watering it down to fit other moulds. She was as original as we have grown to know her and beaming from a successful 2019 that was coming to an end.

A young black village girl launched a Xitsonga-inspired clothing line with giant retailer Edgars, earned wins at the 25th edition of South African Music Awards for Newcomer of the Year and for Best Female Album, before going on to scoop Best International Act at the 2019 BET Awards in Los Angeles. Vogue magazine selected her for its Vogue World 100, a list of people in music, television and fashion who are radically reimagining the landscapes of fashion and culture globally. Not at all surprising that she landed up on the list and on the line up for Afropunk Joburg.

When Egoli by the multi-award-winning Sjava came on, it echoed the black youth struggles the festival intends to shed light on. “Namhlanje mama angeke ng’lale ekhaya, Namhlanje mama angeke ng’buye ekhaya. Ngiyosebenz’ egoli ngzokwakhela umuzi wakho.” Loosely translated as “Today mother, I will not spend the night at home. Today mother, I will never come home. I am off to work to build you your own home,” encompasses a historical black struggle of economic migration to major cities such as Joburg and Cape Town.

The song spoke of a common struggle many black SA youth in this country, and very city, find themselves in. Having to leave their loved ones and homes, to make the journey to Egoli (Joburg). This is where some do not work towards building their own lives, but by firstly doing what undoubtedly has to be one of the most revolutionary acts of uplifting their families back home out of poverty by, among others, building them homes they did not have the privilege of growing up in.

Known in South Africa as Black Tax, at its core, it is a colloquial term for financially assisting parents, siblings and/or other relatives. It is a balancing act at best, between the selfless responsibility felt to immediate and extended families and the desire to attain financial freedom.

Radical self-care, which is heavily preached by the festival often times has to be abandoned by such fellow black working youth. They constitute a tiny number of young employed persons in a country with close to 60% youth unemployment rate. The sacrifice made, forgoing one’s desires for the sake of poverty alleviation is in its self revolutionary, working towards reversing decades of generational poverty.

Fashion was in full expression all around.

The exercising of the Constitutional right to freedom of expression was, indeed, done in leaps and bounds. Individuality was the order of the day – the type of individuality that is closely linked to freedom; the freedom to be comfortable in one’s own black skin; with hair and clothes that celebrate one’s culture. Young black people pushed boundaries in terms of what society told them what they could and could not wear, and how they could or could not style their afros and more.

Each and every single artist that performed exuded this great sense of individuality, from Solange with her beautifully braided hair that she reminded everyone ‘not to touch’ to Sjava and Sho Madjozi repping their tribes’ respective styles from days gone by but given an urban and progressive twist.

The Afropunk Joburg experience is what all black youth need just before entering a new year, or in this case, a whole new decade. Being in one of a few spaces in the world that says black child it is okay to be you, stay strong, for the revolution never dies.