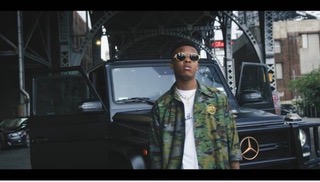 The ‘Coolest Kid In Africa’ has had his sights on world domination since the beginning of his career. On his sophomore album he made his intentions clear with KING which features New York based rapper A$AP FERG. The video, produced by Meji, was shot in the Big Apple and sees NASTY C ‘whipping the devil’s car’ an all-black G63 Mercedes Benz through the city.

A$AP FERG makes an appearance in the video to perform his verse and an interesting cameo comes in the form of SHANTELL MARTIN, a British visual artist best known for her stream-of-consciousness drawings and light projections. She has worked with the likes of KENDRICK LAMAR and big brands like PUMA so it’s safe to say that NASTY C is in great company.
“I like to stretch the boundaries of art as its influences are endless,” comments Nasty C. “Shantel and I met at her studio in New Jersey and created a collaboration on the spot. We really connected. What she created for Strings And Bling was a masterpiece; I’m honored to have her in my video.”
“I really enjoyed sharing my work with Nasty and his whole crew. The whole experience felt really personal and I loved getting to know him and his story, recalls Martin.