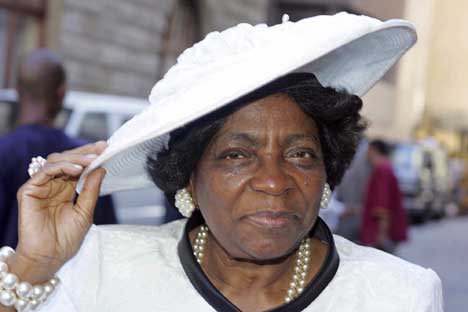 The Oliver & Adelaide Tambo Foundation is set to host a panel discussion titled Deconstructing the Definition of a Freedom Fighter: #NotJustAWife on the 11th of September 2019 at the Women’s Jail, Constitutional Hill. The dialogue seeks to highlight the role of womxn in the liberation struggle and places emphasis on shifting existing narratives around the contribution that womxn made then and continue to make today.

Deconstructing the Definition of a Freedom Fighter is part of the #MaTambo90 campaign that will honour Adelaide Tambo, who would have turned 90 on the 18 July 2019.  The campaign consists of a serious of discussions that will not only unpack the contributions that womxn made throughout the struggle for liberation, but also the impact of the existing narratives around womxn today.

The event will be facilitated by film programmer and television producer, Lesedi Oluko Moche who was also one of the 2018 Mail & Guardian’s Women Changing South Africa.

The Oliver & Adelaide Tambo Foundation has brought together a diverse panel of women who have contributed to the gender discourse, including the former Speaker of the National Assembly and freedom fighter, Ms Baleka Mbete, and renowned LGBTQIA+ activist and filmmaker, Dr Bev Ditsie. The panel also includes the customary law expert and General Manager of the National Heritage Council, Adv Kagiso Maphalle. Rounding off the panel is the Head of Responsible Business at Old Mutual, Khanyi Chaba, who has dedicated her life to uplifting single mothers and girl children.

To attend the event kindly RSVP to info@tambofoundation.org.za by the 9th of September 2019.

Update: Flying Fish to flavour your taste buds and ears this summer