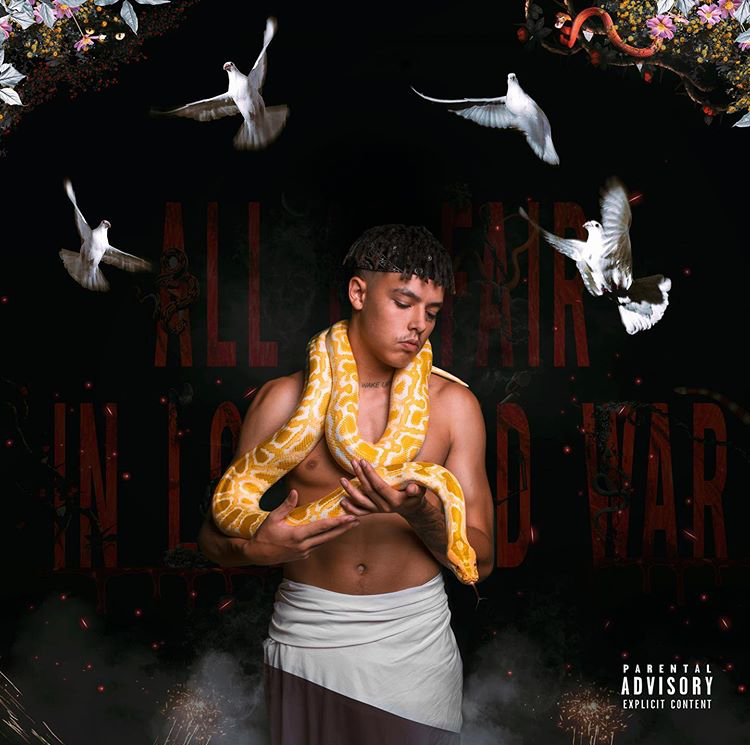 If you are as afraid of snakes as I am, you are probably not going to like J Molley’s new cover for his latest project. A yellow boa constrictor hangs over his shoulders, around his neck and arms. Even the extra artwork of doves that hang above his head isn’t enough to distract you from the prey squeezing reptile.

Molley said, “I had planned to drop a mixtape at the beginning of the year, but due to Corona I had to postpone it. The whole idea around the mixtape was to do with 19th-century psychology. It’s just certain ideas people had. How we evaluated the mind and we saw that we all have these symbols, ideas, pictures and fears.”

In his new album titled All Is Fair In Love and War, an expression that has been used over again, J questions if there is any fairness in life considering all things happening in the world that aren’t fair.

“Rules are merely an invention of the human mind to determine fairness. In love and war, no one obeys the usual rules and behaviour. Life is not fair and that’s something evident to me. We have these wrong views of life that we are born into. Life goes a completely different way than we think it’s going to go. We see the cruelty of the world when we go out there and realize that there isn’t any fairness,” said Molley.

This project comes after the release of his EP, Leader of The Wave and prior to that, he released his first album titled Dreams Money Can Buy. We bear witness to his growth in his latest offering.

“It ranges from every genre, but I haven’t lost my old element. Fans can still get from my music now what they got from me 3-years-ago, in a much more evolved way.”

Molley gave us a taste of what to expect in his mixtape when he released his well-received first single, Ang’na stress. Here he features Costa Titch and Yanga Chief. The album also features Ckay in his second release, Fake People. The rest of the collaborations include hip hop names – Frank Casino, Riky Rick, Nadia Nakai, Focalistic and BurningForestBoy.

The spotlight on depression and anxiety has been on the rise globally and the pandemic has accelerated the matter. J Molley has openly shared his experiences of depression through his music although he admits to never seeing a therapist.

Molley said, “I never thought that I needed a therapist because I always read books and I have always been educated on life in general and the human mind. The biggest thing that’s helped me is to educate myself more than anything. You can’t make a decision in life until you have seen all the different sides of it. You have to evaluate everything. Self-introspection is also important.”

With this album, J Molley hopes people take their time to listen, to read the lyrics, experience the tape for what it is and have an open mind.

All Is Fair In Love and War is out now and available on all digital platforms.