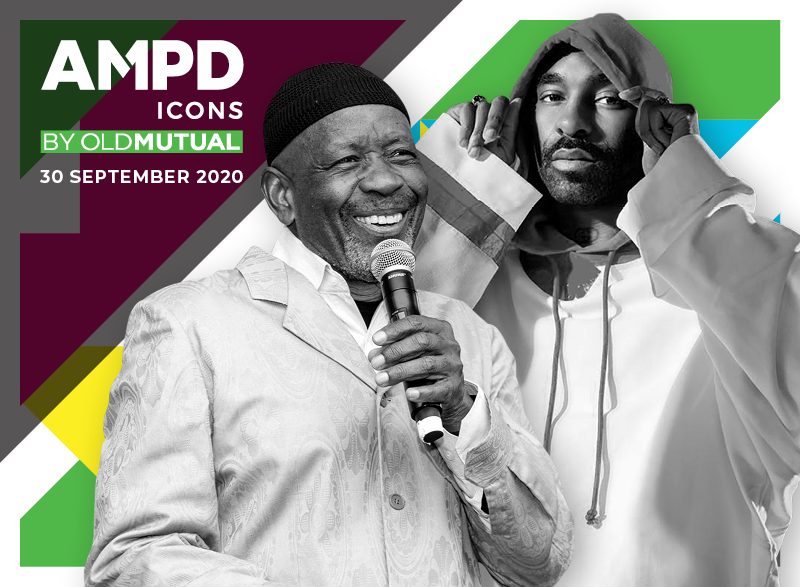 Succeeding in the music business is like personal relationships; the more time and effort you invest in it, the more successful you will be, says South African music legend and Academy Award nominee Caiphus Semenya. Speaking in the final episode of the Old Mutual AMPD Live series and the AMPD Icons Conversations virtual session, the veteran musician told ‘new star’ Riky Rick that creativity could not be separated from the business.

The earlier in one’s career that this truth is realised, the better, says John Manyike, Head of Financial Education at Old Mutual. The point of awareness usually comes when the transition is made from amateur to professional artist. “It is when a career begins that business decisions must be made. There are accounts to be opened and expenses catered for. By opening a company, consolidating income and expenses, tax planning and taking a monthly salary from the company, means being in control.”

Semenya, who is married to equally legendary Letta Mbulu, said his initial break occurred in 1958 when the band he was playing with won a competition and were offered roles in the musical King Kong. The play enjoyed widespread success in South Africa and internationally and led to Semenya turning professional. It was in London, on the King Kong set, that he met Letta Mbulu whom he would later marry.

In defiance of apartheid laws at the time, Semenya and other artists became part of the Union of South African Artists which was dedicated to promoting the arts and securing a place for black musicians and actors and creating an artistic hub in Johannesburg. “Organised specialised groups often benefit members by offering professional business advice. Professional advice is a good investment. Accountants and personal finance advisers should be amongst the first to be consulted when a career is beginning to take off,” adds Manyike.

Semenya left South Africa for the United States where he later worked with some of the biggest names in the media industry until he returned to South Africa in 1991. In Los Angeles, as both Letta and he were building their performing careers, it became apparent that Letta identified better with American audiences.

Semenya, realising that this was a chance for personal growth rather than an obstacle, concentrated on writing – something that led to significant opportunities and financial success. “One of the keys to success is being prepared and having a ‘Plan B’. Instead of being limited to one career, a second option offers opportunities to create additional streams of income. If activity declines in one sector, you can then concentrate on another and keep earning.”

After writing and arranging music for Letta’s productions, Semenya’s work was noticed. He worked with Harry Belafonte, Quincy Jones, Lou Rawles and Michael Jackson. From there, it was just a step to creating the music for the Roots TV series in 1977, which won him an Emmy, and work on The Lion King.

Back home, Semenya and Letta received widespread recognition and numerous awards-including honorary doctorates from UNISA. He continued to perform and was a headliner in the 2015 Buyel’Ekhaya Pan African Music Festival in East London. Both he and Letta later performed in Cape Town at Winnie Mandela’s 80th birthday.

“Unfortunately, the reality is that fame and fortune can be fleeting, so planning for life beyond performing is vital. Being prepared for the future means having short-term, medium-term and long-term financial objectives,” says Manyike.

“Being able to survive the unexpected and build financial independence depends on becoming financially literate and investing for the short, medium and long-term and preferably undertaken with the assistance of a registered personal financial planning adviser. The time invested today will pay handsome dividends in the future,” he concluded.

Dr Bone takes us back with single KwaZet ft. Zakwe