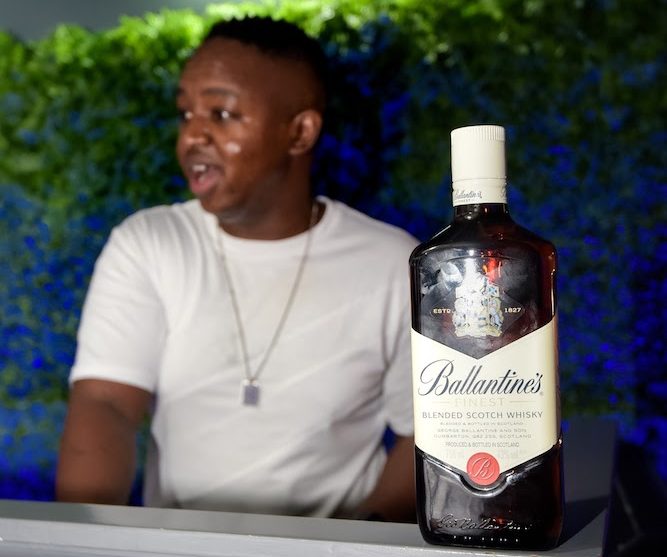 Dj Shimza is now the new addition to the Ballantine’s family! Shimza’s loyalty to his hometown perfectly encapsulates the brand’s support for local innovators who have stayed true to themselves. For this partnership, which was launched at his restaurant, The Hang Awt, located in Tembisa, Shimza also revealed his own signature combination drink using Ballantine’s whisky aptly named the “Shimometer”.

On why DJ Shimza was chosen to attract the new generation of whisky drinkers, Ballantine’s senior brand manager Kev Ramraj shared, “Our ethos is ‘Stay True’ – staying true to your beliefs and who you are. It’s never about finding just a big artist, it’s about finding what they’re about and what they stand for. The synergy has been seamless and that’s why we’ve partnered with him.”

Firstly, congratulations on becoming the latest addition to the Ballantine’s family. When looking at Ballantine’s previous partnerships and collaborations, they’re with some of South Africa’s most influential artists and groundbreakers. We’re talking the likes of Black Coffee, DJ duo Black Motion, Sho Madjozi, Busiswa and now your name’s in the spotlight. Talk us through how this exciting partnership with Europe’s No.1 selling scotch whisky came about.

“Thank you so much. I think they’ve been looking at the stuff I’ve been doing, where I come from, my background story and it correlated with what they stand for, staying true to yourself – which I think I’ve managed to do. I’m from Tembisa. My biggest festival is held here and my restaurant business I started here. So, for me, I feel I’ve got a solid foundation that not a lot of artists have, where even if I go wrong anywhere else in the world I know I can go back home and I’ll still have some sort of currency.

What I’ve created at home is very important and so is staying true to what I do. I don’t conform to what everyone else is doing nor do I look at trends, I just do my own thing. I think that’s what they saw and liked when they approached me. It only made sense for me to partner with them”.

You’re widely recognised as DJ Shimza the artist but what’s less known about you is your philanthropism. You prioritise giving back to your community similarly to the brands’ philosophy and ethos of supporting local artists and their crafts. How will your partnership with Ballantine’s move beyond just being another celebrity endorsement in terms of social responsibility especially with regards to your foundation Shimuzic?

“I feel like the synergy between myself and the brand, what they stand for, what I stand for and the music that connects us is something we can take and work on. With this campaign we’re speaking to young upcoming artists and people in the industry that we are in, who are looking up to people like me and want to be a part of brands like Ballantine’s to say; you don’t have to change for anyone, we like you the way you are and that’s your unique self.

Look at Sho Madjozi and what Black Motion is doing they didn’t say “this thing is not going to work” but instead they did things their own way and that’s the same principle I work with. I’m hoping there’s a lot we can do to inspire upcoming artists, work with them and to help them with their struggles. What I do every year is host a free workshop and share information with people that want to be clued up. That’s one of the things myself and Ballantine’s can work together on as a partnership to take things to the next level because I’ve just been doing this myself but when working together we’ve got the ability to reach out to them and there’s so much we can do – so much more people that we can work with”.

Many insist the right way to enjoy a good scotch is when it’s served at room temperature and perhaps with a little water added whilst others argue that it’s the glass that makes the drink. Share with us your favourite or preferred method of enjoying Ballantine’s scotch whisky.

“There’s no wrong way – It’s quite funny because I don’t drink alcohol, yet I’ve worked with so many alcohol brands. If a brand sees a perfect fit with another brand which they believe the partnership can go beyond selling alcohol, that’s a statement on its’ own. I don’t consume alcohol but I gave them my brand and I can work with them because there is so much more that we can do beyond just influencing people to take alcohol”.

The core concept of your Ballantine’s “There’s No Wrong Way” campaign, champions and encourages having confidence in being and remaining your authentic self. How would you define authenticity and what message would you share on the importance of remaining true to yourself.

“Remaining true to yourself means being as authentic as possible so that people can spot you from within a crowd. That’s how you become that special person who works with people who see that, but if you want to be like other people, you’re going to do things the way they did their things. I wouldn’t want another Shimza in life but I want to inspire someone to do things their way so that they can be whoever they want to be. That’s what it is, just stay true to yourself and good things will come to you”.

You’ve now signed a partnership with Ballantine’s, what’s next for DJ Shimza?

“I don’t work on plans. It’s only now recently that I’ve engaged an international agency that I’m working with on management. Earlier this year I was supposed to play Tomorrowland but now I understand the importance of strategy and planning, we’ve developed a strategy of where we want to be internationally. What I’ve acquired right now has always been about what feels right, so merging that with a proper strategy and people that have the experience will take me to another level I wouldn’t get to if I were alone. Having a partnership with Ballantine’s gives me an advantage because there’s a lot of things they can plug me into which fall into our strategy of getting to the level we want to go to. I just started a record label that’ll be releasing young upcoming artists’ music out to the world and we’ll just keep pushing. There is so much we’re doing.”

It was a successful launch for Ballantine’s and talking about what the future holds for Ballantine’s x Shimza Ramraj added, “Shimza will be the face of the brand. We’re going to go together but also grow together”.

Be sure to look out for more on the ‘There’s No Wrong Way’ campaign in the coming weeks across television, radio and online. Not for sale to persons under the age of 18.

Review: Five Avon fragrances to try out this summer