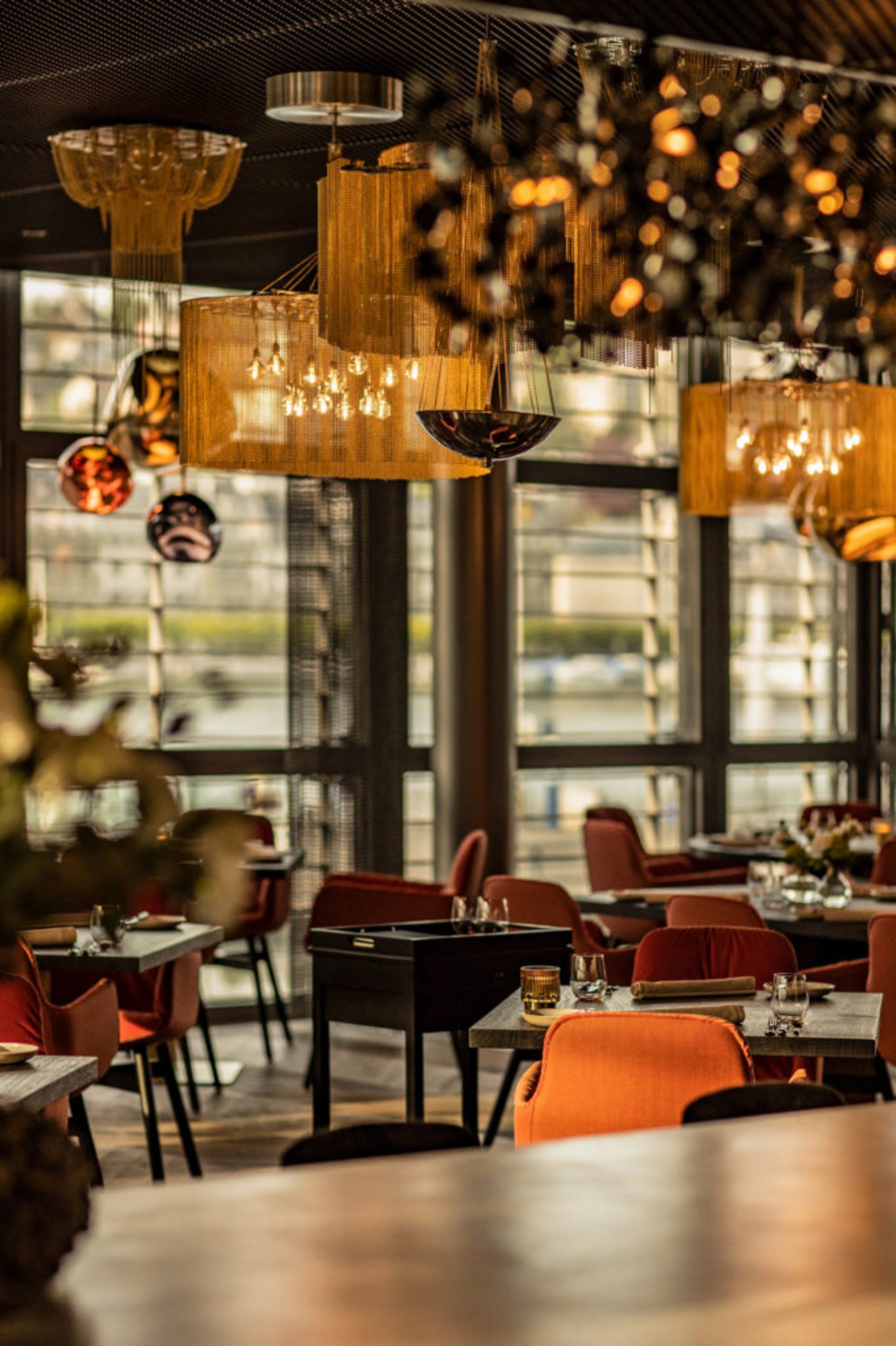 A gently billowing sea of willowlamps, clustered from the ceiling, adorns the newly renovated Lucide restaurant, which is the culinary jewel of the landmark cultural building KKL Luzern.

Centrally located and built on the shores of the Vierwaldstättersee, also known as Lake Lucerne, the KKL Luzern is close to the historic heart of the Swiss city. This architecturally renowned building is also famous for an acoustically superior concert hall, high-profile music concerts, its conferencing and upmarket events.

The building was designed by famed French architect Jean Nouvel and was built according to his plans between 1995 and 2000. One of the leading architects of our time, the Pritzker Prize-winning Nouvel is known for designing all across the globe:

When it comes to the culinary aspect of the KKL Luzern, this is naturally geared towards the needs of sophisticated cultural and convention guests. The KKL Luzern’s on-site restaurant Lucide was completely renovated earlier this year and the revamp was completed in the European Spring of 2020. Lucide is a popular venue for business lunches or dinner among friends.

Baden/Switzerland based Atelier West Architects were commissioned to renew the restaurant’s interior, situated as it is, within the architectural foundations laid by Nouvel. One of Nouvel’s visions for the building was that the waters of the lake would be able to enter the building creating a flow between interior and exterior. The restaurant offers incredible views of the lake, which lies directly beyond its glass windows.

Atelier West has enlivened the interior with a concept that is inspired by Lake Lucerne itself. The captivating new interior scheme pays homage to the aquatic world that lies beneath the surface of the lake. This concept is evident in the details employed throughout.

The open kitchen is a dominant feature and boasts a large chef’s table. This allows guests to experience the dynamic workings of Lucide’s Head Chef Michèle Meier, who has been awarded 16 out of a possible 20 Gault Millau points (an international scoring system that is similar to the Michelin star system) for her French-style cuisine.

Other design details include:

An undeniable talking point of the restaurant is the veritable sea of willowlamps that washes gentle light throughout the venue. Atelier West commissioned Cape Town-based lighting design company willowlamp to create a multitude of chandeliers for Lucide. These appear to float, jellyfish-like, from the ceiling and softly illuminate the space, helping to create a relaxed yet sophisticated atmosphere.

willowlamp’s Creative Director Adam Hoets says, “We are honoured that Atelier West commissioned chandeliers from us for this prestigious project and it is incredible to see how their lake-led vision has come to life. They have used the willowlamps in such an authentic way that is so true to how these pieces were inspired in the first place – by nature!”

A variety of gently cascading willowlamp’s such as the Faraway Tree, Flower of Life, Fuschia and Ngoma Drum were commissioned for the project.

The Faraway Tree is an organic `tree-shaped` chandelier inspired by graphic representations of trees on architectural drawings. It is illuminated by a concealed light source within a suspended up-lighter dish.

Flower of Life, willowlamp’s iconic award-winning design, is based on the sacred geometry known as the `flower of life`. This elegant and intricate multi-level chandelier is evocative of a classic 1920`s style.

The Fuschia’s design is based on the form of dangling Fuschia flowers with the metal `petals` bowing under the weight of the chain. It is illuminated by a suspended spiralling arrangement of Pyrex glass balls.

The Ngoma Drum is a cylindrical, drum-shaped chandelier with a support frame inspired by Venetian wrought-iron design.