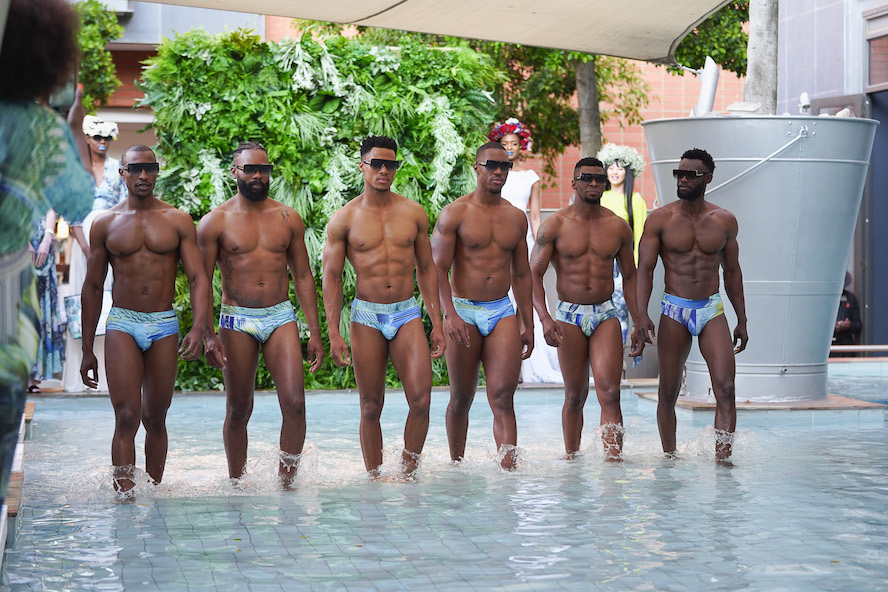 Couture fashion designer David Tlale has once again joined forces with Avon to create Exotic – an affordable luxury perfume and summer collection as part of the David Tlale X Avon collaboration. Officially launched and showcased at the African Pride Melrose Arch, the event was an important one as it showcased a celebration of two powerhouses coming together for the greater good.

A cross-pollination between two brands. Where Paris, New York and The Diamond Walk meets community and family, David Tlale X Avon is the deliverance of luxury made easily affordable to the masses. “It is all about bringing affordable luxury to the public and making sure that every women, every girl, every child and anyone who likes to buy things or anyone who likes things can actually now afford to buy a piece of David Tlale. And this has been made possible with this beautiful partnership with Avon,” said Tlale on how the collection came to be.

Avon, the brand that has won the coveted Sunday Times Gen Next Best Make-Up Brand award for the 10th year in a row, has embarked on a powerful movement called #WatchMeNow. This movement is the brand’s re-commitment to the celebration of womxn, the LGBQTI+ community and everyone who aims to uplift themselves and better the world they live in. With the addition of David Tlale also driving the movement, he is a testament that black child – it is possible. The Vosloorus raised fashion designer has overcome obstacles within his career and the industry that almost saw him not be. He could not have imagined that someday he would collaborate with Avon. More so especially with all the trials and tribulations’ he has been through, “#WatchMeNow” Tlale says as he continues to stand the test of time. “It’s all about really looking back and reflecting where we come from as a nation and look at us now,” Tlale elaborates.

“As we are launching, I know I have followers all over the continent. In Namibia, I was talking to some people who are quite excited to actually get to experience the product. In Nigeria, in Ghana, in Uganda – you name it. As small as we think we are as a country, we’re actually trailblazers,“ Tlale on the importance of the launch and collaboration of David Tlale and Avon. More so in this moment of the #WatchMeNow movement.

Exotic His & Hers Perfume

Somewhat made to flatter one another, the Exotic His & Hers perfumes were made to make your presence known in any and all spaces you occupy. On whom the scents were made for Tlale says, “These individuals – male and female – when they step into a crowd, or they get in a car, or they get in a taxi, or in a flight or train or anything – they speak volumes. They say I am sexy. I am powerful. I smell good.”

The common denominator between the two perfumes is patchouli, which is a garden flower that has a sweet, aromatic fragrance. Fresh and floral for her and masculine for him. These are the notes that are used to capture the opulent element without it being overpowering. A fragrance that won’t leave you with a headache but will only leave your footprint as it is designed to be enjoyed and experienced by those around you with you only reaping the rewards. “When we pulled these notes and these scents together, my take was let’s bring an element of luxury,” Tlale on his perfume line.

Inspired by South African heritage, the Exotic Summer Collection is a fusion of tradition and craftsmanship infused with aquatic elements. In this collection, Tlale’s primary creativity honed in on the Xibelani – a traditional Xitsonga skirt – that is worn to give prominence to the hips. Not wanting to go too literal with his interpretation, he gave the collection a modern and airy touch.

The resulting collection? A dreamy mix of a cohesive created line that is light, bright, meticulously crafted and moves effortlessly. Still embracing our South African roots, the collection emphasises this as presented by Tlale in a chic, sexy way. Tlale on his collection said, “Let’s elevate it, which falls in beautifully with the theme – #WatchMeNow. I move to my own dance, to my rhythm. It’s what we’re all about as Africans.”

Without its challenges, the collection was built during the pandemic while South Africa was still in level 1 lockdown. While they had creative freedom in the studio, the delay really set in when approval was needed from stakeholders such as Avon, etc. As helpful as technology is even in the fashion and textile industry, it is still an industry of look, touch and feel. “It taught us a lot. That we can’t just do things in one manner. Sometimes you have to trust the technological part of it,” Tlale commented.

So far, we have fashion accessories and perfumes from the collaboration between David Tlale X Avon and we can expect to see more in the future. When asked what more we can expect from the dynamic duo, and not one to give everything away at one go, Tlale simply said, “As we collaborated with Avon, both parties decided that this can’t just be one season. This can’t just be the same thing over and over again. We are already cooking up some few things for the next season so just keep watching this space.”

According to Tlale, the perfect summer colour for 2020 is white. Symbolising purity, especially in regards to everything we have been through with COVID-19, white is a sign of a clean, fresh start. Tlale went on further to explain that the creative industry is going with the monotone colours this year. In addition to white, expect beige and baby yellows to also be embraced. Also, these are calming and comforting colours that let us know that it is ok to start over and dream again.

His advice to up and coming and aspiring fashion designers is to finish school. As much as school and learning have been a challenge this year, it is still of paramount importance. “It’s very important to get all your basics right. It’s important to be patient. It’s important to be an intern in someone’s business,” Tlale explains, “Find your feet. Find your ground. Know your signature.” He advises to find and know your strength and perfect that as not everyone is called to be a fashion designer or creative director. Yet there are so many roles played by people of utmost importance to bring the vision together. Be the superstar in your elective.

Not a PR stunt but a partnership. A partnership that calls for us to join in on the journey where only the finest of the fine is made available to everyone. All the while, empowering others at the same time. Watch this space as there is still more to come from David Tlale X Avon.

The Time is NOW! To taste the best wines that South Africa can offer!