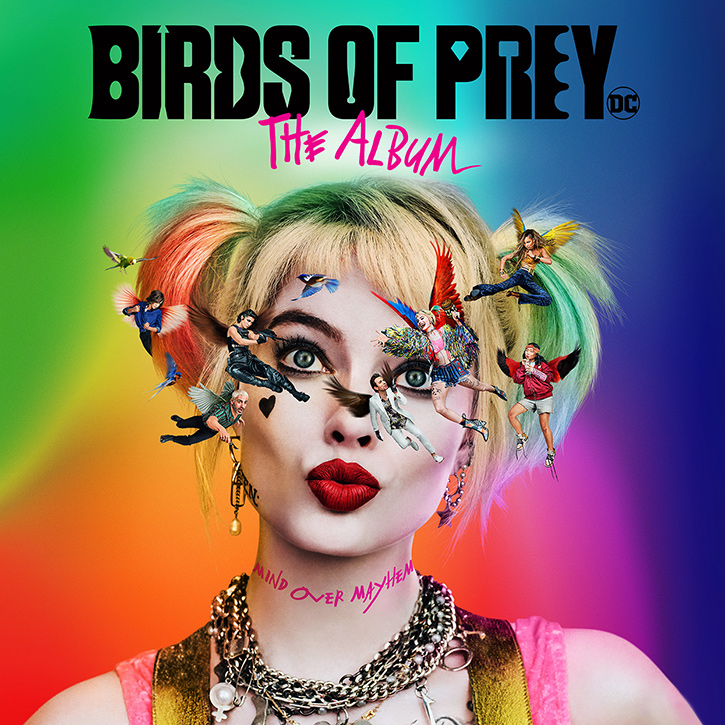 Atlantic Records has officially unveiled Birds of Prey: The Album. The all-female arsenal of brand-new, exclusive tracks from global superstars and powerhouse women as the companion album to the new film starring Margot Robbie as Harley Quinn. The soundtrack is now available globally at all retailers and streaming services and is highlighted by this week’s release of Halsey’s Experiment On Me. Arriving alongside the groundbreaking album is an explosive new video for the Harley Quinn anthem – Joke’s On You by Charlotte Lawrence, featuring scenes from Birds Of Prey (And The Fantabulous Emancipation Of One Harley Quinn). Joke’s On You was also featured in a Fortnite Harley Quinn skin reveal that went live last night.

BIRDS OF PREY: THE ALBUM’s massive rollout launched at the top of the year with the instantly iconic lead single Diamonds by Megan Thee Stallion and Normani, which sent Twitter and YouTube into a frenzy upon release. Over the past month, the album has been building with weekly releases including Doja Cat’s feisty Boss Bitch that was named the #1 song of the year by ELLE. Charlotte Lawrence’s cinematic and hypnotizing Joke’s On You and the irresistibly catchy Sway With Me – by Saweetie & GALXARA – dropped last week alongside an insanely fun video featuring Ella Jay Basco reprising her sassy character from the film, Cassandra Cain. Watch as these tracks and videos set the scene for the fantabulous world of Birds of Prey in the official soundtrack trailer.

“Music was a huge part of the film so we had to have a line-up of the hottest female artists.” – Margot Robbie

Birds of Prey the film and BIRDS OF PREY: THE ALBUM held an exclusive event that turned Hollywood into Harleywood, kicking off the film’s global takeover only two weeks ago. Margot Robbie and the cast gave a special introduction to live performances by Doja Cat and Charlotte Lawrence, while fellow soundtrack artists Megan Thee Stallion, Saweetie, Galxara and Whipped Cream partied and immersed themselves in the world of Birds of Prey. Check out photos and video from the event.

BIRDS OF PREY: THE ALBUM continues the hugely successful partnership between Atlantic Records and Warner Bros. Pictures. The two companies previously teamed up for 2016’s GRAMMY® Award-nominated SUICIDE SQUAD: THE ALBUM, which topped album charts in over 70 countries around the world, including two consecutive weeks on the Billboard 200. Certified 2x platinum by the RIAA, SUICIDE SQUAD: THE ALBUM defined the summer of 2016 with several platinum and multi-platinum certified singles. These included the 7x platinum, GRAMMY® Award-nominated “Heathens” by twenty one pilots, the 3x platinum “Sucker For Pain” by Lil Wayne, Wiz Khalifa & Imagine Dragons with Logic and Ty Dolla $ign (Feat. X Ambassadors), and the GRAMMY® Award-nominated, platinum-certified “Purple Lamborghini” by Skrillex & Rick Ross.

BIRDS OF PREY: THE ALBUM was produced and overseen by Kevin Weaver, President, Atlantic Records West Coast (Soundtrack Album Producer of The Greatest Showman, Suicide Squad, Furious 7, The Fault in Our Stars, The Fate of the Furious). Named by Rolling Stone as a “soundtrack guru,” Weaver is a GRAMMY® Award winner and five-time nominee, who has produced numerous multi-platinum soundtrack projects that have amassed tens of millions of albums sold worldwide.

“Birds of Prey: The Album is seeded with a murder’s row of butt-kicking, all-female acts”– BILLBOARD

BIRDS OF PREY (AND THE FANTABULOUS EMANCIPATION OF ONE HARLEY QUINN)

You ever hear the one about the cop, the songbird, the psycho and the mafia princess? Birds of Prey (And the Fantabulous Emancipation of One Harley Quinn) is a twisted tale told by Harley herself – as only Harley can tell it. When Gotham’s most nefariously narcissistic villain, Roman Sionis, and his zealous right-hand, Zsasz, put a target on a young girl named Cass, the city is turned upside down looking for her. Harley, Huntress, Black Canary and Renee Montoya’s paths collide, and the unlikely foursome have no choice but to team up to take Roman down.

“Birds of Prey is going to be the first spectacular soundtrack of 2020.” – IDOLATOR

Directed by Cathy Yan from a script by Christina Hodson, the film is based on characters from DC. Robbie also produced, alongside Bryan Unkeless and Sue Kroll. The film’s executive producers are Walter Hamada, Galen Vaisman, Geoff Johns, Hans Ritter and David Ayer.

Birds Of Prey (And The Fantabulous Emancipation Of One Harley Quinn) is in theatres now.

And the Oscar goes to...