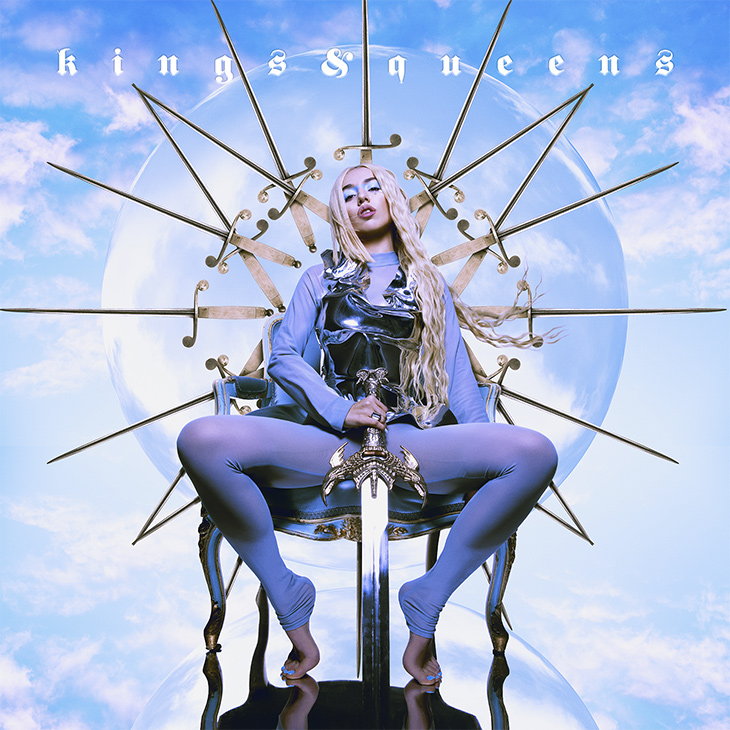 Global pop sensation Ava Max has officially dropped the triumphant video for her critically acclaimed new single, “Kings & Queens.” The video – directed by Isaac Rentz (Katy Perry, Mabel and Nick Jonas) and set in a heavenly throne room where Ava rules as a glamorous Queen over an army of loyal dancers.

“Kings & Queens” marks the first official song to be released from Ava’s hugely anticipated debut album, due to arrive later this year. With the empowering anthem, the “PRINCESS OF POP” shines a spotlight on influential female kingmakers who are too often ignored and taken for granted. The song received more than 10 million audio streams globally during its first week Upon release, instant critical praise rolled in with The New York Times including the song in their esteemed “The Playlist” and Rolling Stone raving, “‘ Kings and Queens’ finds Max delivering a message of female empowerment with a big voice.” “After a breakthrough 2019, Ava continues her run of pure pop perfection with this first track of the year,” declared E! News.

In December, Ava celebrated her extraordinary year with an energetic performance on ABC’s Dick Clark’s New Year’s Rockin’ Eve with Ryan Seacrest 2020. She also gifted fans with the release of “On Somebody” which PAPER quickly called “a three-minute sugar-rush.” “On Somebody” arrived shortly after the release of longtime fan favourite track, “Salt.” “Salt,” which had already earned over 4 million plays via YouTube before being shared across additional platforms, was met by unanimous critical applause from Billboard, MTV, E! News and more. The official launch of “Salt” came not long after Ava celebrated Halloween with the surprise drop of her hauntingly beautiful music video for “Freaking Me Out,” which MTV News praised as “a spooky, romantic Halloween Treat.”

2019 saw Ava officially seal her pop superstar status with the blockbuster success of the RIAA 2x-platinum-certified hit, “Sweet but Psycho.” Named among the New York Times‘ “54 Best Songs of 2019,” the track spent three weeks in the top 10 of Billboard’s “Hot 100,” peaking at #3 at USA Pop Radio. Currently boasting over 1.2 billion global streams and counting, “Sweet But Psycho” – which earned Max her first-ever Teen Choice Awards nomination for “Choice Pop Song” – is joined by an official video that has now garnered over 531 million views. Produced by GRAMMY® Award-nominated super-producer Cirkut (Maroon 5, Miley Cyrus, The Weeknd) and co-written with Madison Love (Camila Cabello), the single hit #1 on both Spotify’s “United States Viral 50” and Billboard‘s “Dance Club Songs” while becoming one of “The Top Most-Shazamed Songs of 2019.” The song’s stateside success followed the track’s remarkable popularity abroad, including four consecutive weeks atop the UK Singles Chart and #1 rankings on charts in nearly 20 countries.

Praised by VOGUE as one of the “Best Songs of 2019,” Ava’s acclaimed summer single, “Torn,” shot up to Top 10 airplay in Europe following the release of the disco-tinged track’s instantly iconic superhero-themed companion video. Created in collaboration with Fiat and shot on location in Milan, IT by superstar director Joseph Kahn (Britney Spears’ “Toxic,” Taylor Swift’s “Bad Blood”), the video boasting over 53 million views via YouTube.

Dubbed an “Artist You Need to Know” by Rolling Stone, Ava has been feted with a wide range of media attention including high profile features in Vanity Fair, Billboard, FORBES, PAPER, and more. The pop star first took over TV with performances of “Sweet but Psycho” on CBS’s The Late Late Show with James Corden, NBC’s TODAY, and The Ellen DeGeneres Show, as well as a summer performance of her RIAA-certified gold single “So Am I,” on ABC’s Jimmy Kimmel Live. Ava – who was featured on the cover of Galore Magazine, which declared “Ava Max is Here to Save Pop Music” – became one of 2019’s most honoured performers, including “Best New Artist” nominations at both the 2019 MTV Video Music Awards and the 2019 MTV Europe Music Awards. The latter was highlighted by both Ava’s first-ever win for “Best Push Artist” and show-stopping live performances of both “Torn” and “Sweet But Psycho.”

CKay makes his billboard debut and it’s no Felony