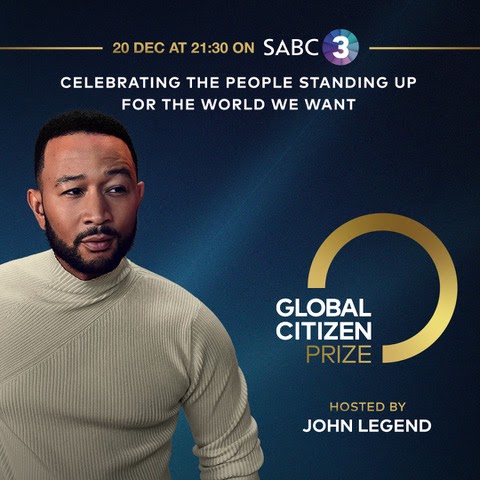 John Legend will also serve as the host of the broadcast event, which will celebrate and honour leaders who are shaping the world we want and doing pivotal work to help end extreme poverty.

The Global Citizen Prize honours those making extraordinary efforts to lift the world’s most vulnerable. To make the world a better place and who inspire others to stand up and take action. The broadcast special will air on SABC3, 20 December 2020 at 9:30 P.M. Visit Globalcitizen.org for a full listing of global broadcast times.

Also, the Global Citizen Prize is introducing three awards. Selected by the Global Citizen and a team of advisors to recognise individuals or organisations who have demonstrated exceptional impact over the preceding year creating positive change and inspiring others through compassion, innovation and unwavering dedication in their respective fields.

Finally, Global Citizen has also launched the #My2020Hero social media campaign, inviting everyone to honour the people in their lives who have done something special during this difficult year to support them, their community, or the world, as we take a moment together to focus on gratitude and hope.

The Global Citizen Prize was launched in 2018 for the categories of World Leader and Youth Leadership and presented live on stage at the Global Citizen Festival: Mandela 100 in Johannesburg, South Africa to Prime Minister of Norway, Her Excellency Erna Solberg, and food and nutrition activist Wawira Njiru of Kenya.

Since the first Global Citizen Festival in New York in 2012, Global Citizen has grown into one of the largest, most visible platforms for people around the world calling on world leaders to honour their responsibilities in achieving the United Nations Sustainable Development Goals and ending extreme poverty by 2030. Global Citizens have mobilised $48.5 billion in commitments and policy announcements from leaders that have impacted the lives of 880 million people living in extreme poverty.

Newmark expands its reach even further in Europe